Virasat-e-Khalsa is conceived as a repository of the rich heritage of the Khalsa its history and culture of the Punjab so as to inspire visitors with the vision of the Gurus, emphasizing the eternal message of the great gurus for the whole mankind.

Towards the end of the fifteenth century, in the Punjab region of Northern India, Guru Nanak Dev founded a faith rooted in the core values of universalism, liberalism, and humanism. The nine Gurus who followed Him built upon and consolidated His teachings, thereby establishing Sikhism not only as a belief system but also as a way of life.

Two hundred years later, in 1699, on the occasion of Baisakhi, the Tenth Guru Gobind Singh formally founded the Khalsa Panth at Anandpur Sahib, establishing a social order committed to peace, equality and justice for all. Today, on the same site, stands the majestic Gurdwara Takht Sri Kesgarh Sahib.

The year 1999 marked the Tercentenary of the Birth of the Khalsa. To commemorate this event, the Chief Minister of Punjab S. Parkash Singh Badal laid forth the outlines of a magnificient edifice to be known as Virasat – e – Khalsa at Sri Anandpur Sahib.

The Heritage Complex is inspired by the rich natural and architectural heritage of Sri Anandpur Sahib, while also drawing heavily from Sikh and regional architecture. Contrary to the tradition of domes which crown the sacred Sikh sites, the roofs of the Museum are concave-shaped receptors facing the sky. Sheathed in stainless steel, they reflect the sun’s light towards the Gurdwara and the Fort.

(price per person on twin sharing) 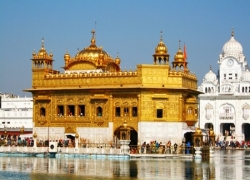 Chandigarh To Amritsa...
The Harmandir Sahib and the Darbar Sahib located in the city of Amritsar, Punjab (India) are informally known as the Golden Temple. Built in the 16th
Best Price  : 6699
Read More

Chandigarh To Shimla ...
Best season to visit to Shimla: May-July and September-November. In Oct-November weather is cool and enjoyable.The weather is generally cool at day an
Best Price  : 8599
Read More