When sound of exhilaration seems to be coming far above from sky and only colorful para-gliders could be spotted above head, the site is most probably Solang Valley of Manali Hill Station, which has a uniqueness that stands out from any other paragliding site in India. What more this is one facet of this hill city, like honeymooner trying to pose wearing ski gears rather than actually willing to try the fun of skiing. Add to that elders on some sort of minor pilgrimage to various temples in Manali, individual getting holy dip in hot water springs, families bonding in picnic spots and many other images, and this hill city comes alive in front of eyes.

A part of Beas River Valley, Manali is situated at an altitude of more than 2000 m from where the eyes fall on the views of forests, orchards, river, mountains ranges and more, for nothing but sheer visual delight. The place once used to serve trade purposes via Manal - Leh route; now the same route is used for the purpose of adventure mainly for the bikers and jeep riders.

Having invitingly secured its history in its name, Manali is associated with legends of King Manu who had the responsibility to protect human civilization after the great flood meant to destroy the world; which he successfully shouldered. If unfolding stories entwined in myths and legend is a loved way to spend holidays, Manali rouses the need to explore the Himalayas with even more intensity.

Spirit of tourism is far from fading even after the consequence of popularity. Be it pleasantly cool months or duration of snowfall during the New Year or Christmas, this hill destination is revered by everyone with the intention or for the experience of Manali tourism.

As the popularity of the place would have it, people can have varied tastes- some appealing to the sense, others exceeding all fantasies. The lingering serenity of a prayer place is a blessing. Couple it with the silent watch of Nature over mere mortals in Manali and the wish to stay in here gets deeper. Following are prime places that begin form foundation of a beautiful trip here- 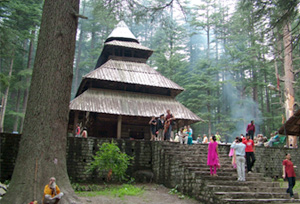 Hidimba Temple - Also referred to as Dhoongri temple, the temple is dedicated to Goddess Hadimba who was wife of mightiest of the five Pandavas - Bhim. Amidst Indian Cedar Forest, the temple is a must-see.

Manu Maharaj Temple Dedicated to the Rishi Manu after whom the town is named, it attracts people because of being one of its type. There are no temples dedicated to Him except for this.

Lord Ram Temple - Located near Vashisht Hot Water Spring, the temple has Lord Ram, the upholder of Dharma as its prime deity. People bath in holy waters and worship Lord and Nature for such gifts.

In addition to these, there are few temples that could be visited at Jagatsukha. Shiva Temple, Gayatri Devi Temple and Devi Sarvali are some of the ancient temples where tourists bound in their faith and devotion pay visit. At Thava, there is a Krishna temple; being among very few tourists to this destination is another magic. Gauri Shankar Temple at Dashal is another treat for religious and spiritual tourists.

Van Vihar Park - Good place to have an evening break with family and kids, it has a children's park and a small pond for boating experience.

Nature Reserve - If avifauna interest a tourist to Manali, this is best to enjoy some of the colors in wings and sky. Deodars on the bank of Beas River only add to the ambience for the birds and tourists to stay longer.

Falls -The waterfalls like Jogini, Rozy, Zana and Rahala in different place make for excellent clicks, bringing out the photographers hidden in individuals on trip. 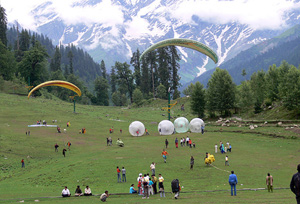 Solang Valley - Ski lovers know the place very well but so does those who know the best vantage point to get some tremendous views of imposing Himalayas. This valet is also known as Snow Point and has ski lifts.

Old Manali - The place is well known for holding onto some time away from crowd which is the case of new town. Orchards are of special interests to tourists just as the old guesthouses located in the area.

Naggar - Somewhere in between Kullu and Manali lies a small village Naggar, which have an old castle of historical importance that is now converted to a hotel.

Some other places of interest are Museum Himachal Culture, Folk Art and Arjun Gufa.

The fun of having these places in addition to the touring Manali is otherworldly.

Kullu - Just 40 Km away, the place more often than not is clubbed with Manali tour packages. The place has its own specialties to see.

Kothi - Very near to Rohtang Pass, the place has best of the Nature's grandeur.

Manali is adventure freak's heaven and not without reason. Most of the extreme sports that are popular in India could be participated in this hill town. Most of the trekking routes in Himachal start from Manali; some of which lead to Hampta Pass, Deo Tibba base camp, Friendship Peak, etc. Paragliding is another adventure activity for which Manali has gained a reputation. People from everywhere come here to take off and be air-borne. Skiing is the winter fun that is brings professionals and novices from everywhere. When snow melts and water level of River Beas rises, tourists can enjoy rafting spells as well. Manali-Leh road opens another door of adventure on bikes; riders that accept the challenge can tell better.

In addition to these, other highly enjoyed activities are rock climbing, River rafting, zorbing, snow scootering and river crossing. Depending upon the season in which visit to Manali is being made, tour packages could include any of the above packages on demand.

Manali is a destination of popularity and thus a flurry of accommodations is available for every pocket side and need. Booking one of the hotels in Manali beforehand is a commonsense, especially if the plan to visit the place is made in peak season. Some tourists might prefer to stay in odd seasons when crowd is not as punishing as it gets in summers. Another reason is the sharp rise in accommodation prices.